Ubuntu-friendly POS system has up to two 15.6-inch screen sizes. 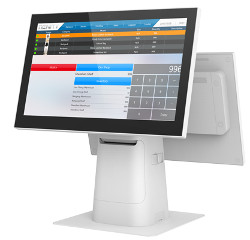 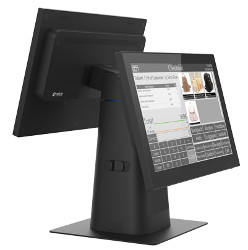 Unlike the previous iF Design award-winning Avalue models, the RiPac-10P1 is a POS terminal equipped with the former Atom Z3735F. In addition to Android (8.x) and Windows 10, the RiVar-1501 also supports Ubuntu Linux. The RiPac-10P1 was the first dual-display POS terminal to combine a 5-inch touchscreen for customers on one side and a 10.1-inch retail display on the other.

In the same way, the RiVar-1501 offers a second optional touch screen for retailers. Two 15.6-inch HD touch screens are mounted on a higher table stand. By comparison: The RiPac-10P1 has a flat triangular bracket, similar to the 4.3-inch Android-based Poynt Smart Terminal.

The 15.6-inch screen(s) offers a resolution of 1920 x 1080 pixels with a brightness of 300 cd/m2, a contrast ratio of 700:1 and a viewing angle of 89 degrees. The capacitive touch screen of the projector and the 14 mm thick front panel are protected against water and dust up to IP65, the back of the device is IP41. The entire terminal can therefore be cleaned with a clean cloth moistened with 70% alcohol to prevent the spread of viruses. 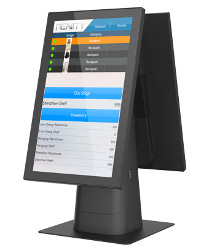 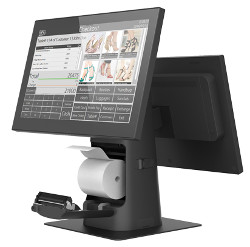 The terminal has a GbE port and 6 USB 3.0 ports: 2x at the bottom of the touch screen and 4x on the table stand. You also have two COM ports with a maximum output power of 5V/12V 1A, two 2-watt speakers controlled by the Realtek ALC892 audio codec and an RJ-11 24V port for an additional cash register.

Other options include a camera, NFC/RFID, magnetic stripe reader (MSR) and a micro-USB power connection. The screen also mentions an additional fingerprint reader.

The RiVar-1501 is equipped with an AT/ATX power supply with a lockable DC connector and can withstand temperatures ranging from 0 to 40°C (32 to 104°F). Wall mounting is also possible. The entire system, including the 431 x 390 x 253 mm standard and the second display, weighs 10 kg.